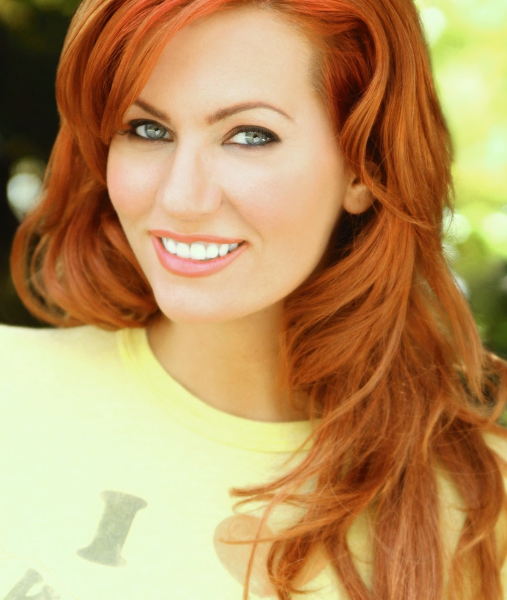 - TICKETS ARE $25 PER PERSON - THE TABLE PRICE IS THE TOTAL

- You will NOT be sat with anyone who is not in your party.

- Tables will be spaced to ensure tables are a minimum of 3 ft apart.

- Our staff will be wearing a mask at all times. Guests only need to wear a mask when they are not at their table.

- Parking - Free and available in the main lot, small lot between the Comedy Connection and Black Duck Tavern, on street and in the LDC lot behind the Black Duck.

- As a courtesy to other guests, we ask that there is no talking or heckling during the show.

April Macie was a finalist on NBC’s “Last Comic Standing” in 2006, has appeared on E! Entertainment, Sirius and XM Radio, Access Hollywood, Talk Soup, and HLN. April has appeared on the Howard Stern show where in 2008 she was voted the “Funniest and Hottest” comedian in America. She is also a regular guest on the Bob and Tom radio show and has toured with the Bob & Tom All-Stars. April has appeared on Showtime’s I Am Comic, Vegas Is My Oyster, Snoop Dogg’s: Bad Girls of Comedy, and was the host of the AVN Awards. April has also appeared on Comedy Underground with Dave Attell on Comedy Central and Jenny McCarthy’s Dirty Sexy Funny on A&E. She also gave a TEDx talk on turning pain into humor. Currently, April travels internationally as a headlining stand-up comedian.

Do you remember the girl in your high school who had a horrible rumor spread about her? It might have involved a football team, or a dog and some peanut butter or maybe processed meat. Well, that girl in Easton, Pennsylvania was April Macie. So, where did she turn for comfort? While some might turn to the Lord, April turned to promiscuity. Promiscuity and then comedy. With her irreverent brand of overtly sexual humor she attempts to break down troubling double-standards and lend her voice to women everywhere. April would like to add that she doesn't really know what irreverent means, but she's heard a lot of other comics use it and thought it sounded kinda' cool.

April Macie travels the world collecting stories and experiences, which she then translates into humorous, relatable tales in front of audiences worldwide. April has been to over 23 countries, 12 of those performing stand-up comedy (not fellatio) for the troops, was a finalist on NBC’s Last Comic Standing in 2006, has appeared on E! Entertainment, Fuel TV, HSN, Sirius and XM Radio, Bob & Tom, Access Hollywood, and was labeled an "emerging talent to watch" by the Hollywood Reporter at the Just for Laughs Comedy Festival in 2005. April is a regular guest on the Howard Stern show, where in 2008 she was voted the “Funniest and Hottest” comedian in America. She is currently in the documentary, “I Am Comic” which premiered at the 2010 Slamdance Film Festival and is currently airing on Showtime and will also be appearing on Showtime in the stand-up special "Vegas Is My Oyster" premiering August 5th. Currently, she spends most of her time traveling the United States as a headlining stand-up comedian.

April has slapped a boyfriend on the toilet for renting out their home for porn shoots, stood on the North Korean border, entertained troops next to the detainee camp in Guantanamo Bay, imported a young Englishman for the summer, only to see him turned away at the border months later for overstaying his visa. She has had numerous crappy jobs-including: a nanny, Hooter’s waitress, clowns assistant, telemarketer – fired from all of them, occasionally smokes weed out of an apple and goes to Chucky Cheese with her friends, thinks double standards are ridiculous and hopes to change the world by empowering women, “One dick joke at a time.”